FREE shipping on orders greater than €50! 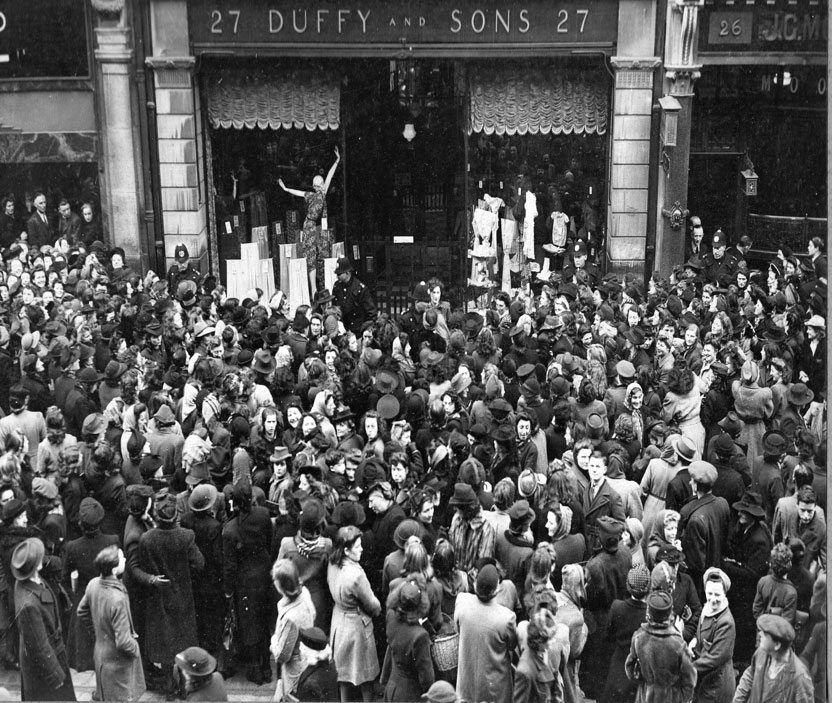 The Easter Rising in 1916 had a huge impact on the commercial life of Dublin City, however, 27 North Earl Street re-opened with a new owner in 1918.

We have evolved over the years from offering primarily women and children’s dress fabrics to specialising solely in curtains, linens and blinds.

One of our earlier successes came in 1919 after the First World War (“WW1”). A typical WW1 plane was made almost entirely from wood and linen.  Due to the ending of the war, the British Government had no further use for the linen. Our founder, Thomas B Duffy, travelled to Britain where he negotiated with the Government for the purchase of 300,000 yards of linen used on the wings during the war. The picture to the right is an advertisement we placed in the Irish Independent on 20 November 1919.  This was a tremendously successful advertisement as we were able to offer the linen at a large discount to the public. 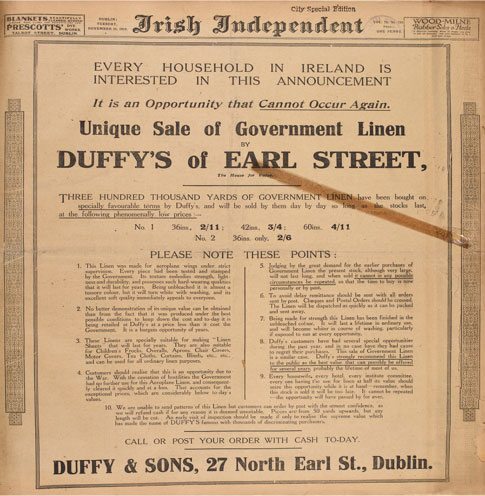 Another prominent event in our history came in 1944 during the Second World War. The picture to the right was taken on Monday 20th March 1944 and was the result of an advertisement by Duffy’s in the Irish Independent.  The goods being offered were Wool Afgalaine dress fabrics, 36” wide at 2/6 per yard. The goods had been held in stock for four years, being the last order imported from Italy by Duffy’s before Italy entered the war in June 1940.

We had held the goods in stock in anticipation of shortage of stocks and decided to release some of the stock in 1944 at a price it would have sold at in 1940. We experienced such a large crowd that we were forced to close the store that day. This photograph was shown on RTE’s the Late, Late Show and subsequently discussed on the Gay Byrne Hour in 1975.

Duffy's
Manage Cookie Consent
Cookies are used for ads personalisation. To provide the best experiences, we use technologies like cookies to store and/or access device information. Consenting to these technologies will allow us to process data such as browsing behavior or unique IDs on this site. Not consenting or withdrawing consent, may adversely affect certain features and functions.
Manage options Manage services Manage vendors Read more about these purposes
View preferences
{title} {title} {title}